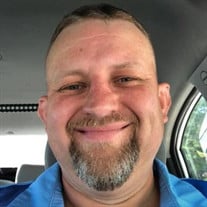 Benjamin L. McCoy, 44, of Arenzville, IL passed away on Monday, March 29, 2021 at 9:55 PM. He was born in Springfield, IL on December 10, 1976 the son of Lowell “Bub” and Frieda L. (Kiper) McCoy. Ben is survived by his three sons, Owen, Parker, and Payton McCoy; his father, Lowell (Clara) McCoy; his girlfriend, Lindsay Hager; one brother, Eric James (Carrie) McCoy of Richmond, TX; one sister, Amanda Rose (Josh) Schroeder of Secor, IL; nephews, PFC Bradley McCoy (companion Ashley Koontz) and Trenton McCoy; niece, Samantha McCoy; stepsisters, Victoria Ann (Rene) Madsen of Columbus, GA, Wendy Jo (Eddie) Gailey of Edwardsville, IL, Christina Marie (Monty) Knepler of New Berlin, IL; and one step brother, J.R. (Adrian) Bye of Pleasant Plains, IL. Ben was also survived by his adopted family, the Meyer’s (Chris, Meghan, Kenzie and Addie). Ben was preceded in death by his mother, Frieda, and both his maternal and paternal grandparents. Ben served in the Army National Guard and worked as an Engineer Armament Section Leader before retiring as an E6 SSG. He was a member of the Arenzville Methodist Church in Arenzville, IL. He was also a member of the Arenzville American Legion Post 604, and served as a Chaplain for the VFW. Ben served on the Triopia CUSD 27 school board, where he was also a baseball and basketball coach. He was an avid CUBS Baseball fan and loved watching sports. He enjoyed raising cattle on the farm with his dad, spending time with the Meyer’s family and making his adopted nieces, Kenzie and Addie “Little Tank”, laugh. Ben enjoyed spending time with friends and family, but nothing made him happier than spending time with is three boys. A visitation will be held for Ben at Lintner-Hurley Funeral Home in Chandlerville, IL on Friday, April 2, 2021 from 4:00 PM – 6:00 PM. A funeral service will be held on Saturday, April 3, 2021 at the Arenzville Methodist Church at 10:00 AM. Pastor Randy Azbell will officiate with luncheon and fellowship immediately following. Burial will follow at Snicarte Cemetery near Chandlerville. Memorials may be made to the Arenzville Methodist Church to be used for window restoration or to an extracurricular fund for his boys’ teams, made payable to Jody Bell. Condolences may be left for the family at www.hurleyfh.com Linter-Hurley Funeral Home in Chandlerville, IL is assisting the family with arrangements.

The family of Benjamin L. McCoy created this Life Tributes page to make it easy to share your memories.

Send flowers to the McCoy family.