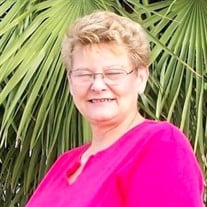 Brenda L. Decanter, 72, of Mason City, died Friday morning, August 13, 2021, in Springfield Memorial Hospital. She was born March 31, 1949, in Springfield, Il, to the late Wayne and Sarah Price Tripp. An avid gardener, Brenda also enjoyed bird watching and tending to her yard. She spent many years at home raising her son Sean. As a teenager one of Brenda’s first jobs was working as a waitress at the White Front Café in Mason City. She is survived by her son Sean Donohue, and his wife Amanda, of Alexandria, VA, two sisters, Becky (Phil) Novak, of Springfield, and Erin Aldrich, of Mason City, and a brother Robert (Carolyn) Tripp, of Lincoln. Additionally, she is survived by two aunts, Jane Jones and Susie Wys. She also has one niece Debbie Owens, and two nephews Brandon (Shari) Fletcher, and Daniel Tripp. She leaves behind two grandchildren, Ryan Donohue and Jack Skinner. Brenda also leaves behind her beloved dog Pearl. In addition to her parents, she was preceded in death by a brother-in-law, Larry Aldrich. A funeral service will be held at 11:00 am on Thursday, August 19, 2021, at Hurley Funeral Home, 603 E. Chestnut in Mason City, burial will follow in Mason City Cemetery. The family will receive friends one hour prior to the service starting at 10:00 am. Memorial Contributions to honor Brenda may be made to the Epilepsy Foundation (on behalf of her grandson Ryan), 17 N. State St. Suite 650, Chicago, Illinois 60602-3315, Pets without parents of Mason County, 29926 IL- 10, Mason City, Illinois 62664 or Wild Canine Rescue, 3309 Robbins Rd. #109 Springfield, Illinois 62711. Hurley Funeral Home, in Mason City, is assisting the family with arrangements. Messages may be left for the family at www.hurleyfh.com.

The family of Brenda L. Decanter created this Life Tributes page to make it easy to share your memories.

Send flowers to the Decanter family.