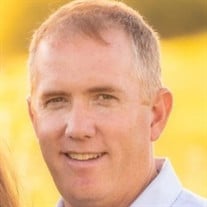 Brian Satorius, known by many as “Opie”, 47, of Petersburg, passed away tragically in a farming accident on Friday, August 20, 2021. He leaves behind his loving wife of 14 years, Brianne (Blout) Satorius, and their two children, Ethan (10), and Ava (6). Brian was born November 9, 1973 to Marsha (Kemper) Satorius of Petersburg, and James Satorius of Petersburg. Also surviving are his sisters Jennifer Satorius of Petersburg (Scott Hewitt), and Ashley (Satorius) Rutz (Matt), of Zionsville IN, a niece Raegan, and many other aunts, uncles, cousins, in-laws, and countless friends. He was preceded in death by his brother Michael, and his grandparents. Brian was a true hometown boy. He was a graduate of PORTA high school where he participated in many sports and FFA. In recent years, he has been involved in the Friends of the PORTA FFA alumni group. He always looked forward to his class reunions and keeping tabs on old friends through his wife’s Facebook account. Brian was an alum of 4-H where he enjoyed showing hogs. He has passed along that tradition with his son, who had his first county fair show this past summer. Brian graduated with his Master’s degree from the University of Illinois, and his Bachelor’s degree from Western Illinois University. He was in an engineering role at TeeJet Technologies, working with GPS products for over 20 years. His job took him all over the world to install, repair, and educate, making good friends along the way. Brian was an avid sports lover. University of Illinois Men’s basketball was his favorite, with Green Bay Packers football as a close second. He and the family could often be seen in the backyard playing one sport or another. Passing on his love and knowledge of sports to his son, especially, brought him such joy. They would talk about his sports, how to improve, and plans for his next game. He has also groomed him to yell equally as loud at the tv during ball games. Brian was a true advocate for agriculture. Farming was his passion. He was growing our farming operation, always finding ways to improve, while also bringing new opportunities, ideas, and education to others. Brian loved being a part of Farm Bureau, serving as the president in Menard County for many years, and being in various specialty groups on the state level. Brian was an alum of the Illinois Ag Leadership program where he made many great friends. Brian had a strong faith and relationship with God. He was very active in the Central Presbyterian Church and has served in many roles. Everyone who knew Brian loved him. He was so full of life. In a social situation, he could always be counted on for a “great idea” or for a hilarious, sometimes 20 year old story to make people laugh. He was a family man; always being goofy together and down for a good snuggle. His daughter says “he was the best tickler” but that she is the better singer. He loved his family and friends fiercely and had a genuine love of this community. Brian’s absence will be felt forever, but his legacy will live on in his children and in all the lives he has touched. We are all better for having had him in our lives. Gone too soon but loved forever. “The pain you feel is the price you pay for having had such a special person in your life”. – source unknown Funeral will be held on Sunday, September 5, 2021 at 1 p.m. at Wankel’s of Petersburg, 18239 Kelly Street, Petersburg. There will be a Celebration of Life directly following. Graveside service will be in between for immediate family and a select few. Arrangements are being handled by Hurley’s of Petersburg. www.Hurleyfh.com . Memorials may be made to the family for an education fund for Ethan and Ava. For those feeling compelled to contribute to Ethan and Ava's future. There were previously established educational and custodial accounts for each of them. Checks can be made out to Edward Jones or Alliance Community Bank, please indicate in the memo how you'd like the funds to be applied. They can be mailed or dropped off at a local location. Alliance Community Bank c/o Brianne Satorius PO Box 470 Petersburg, IL 62675, Edward Jones c/o Brianne Satorius 325 S 6th St Petersburg, IL 62675.

Brian Satorius, known by many as &#8220;Opie&#8221;, 47, of Petersburg, passed away tragically in a farming accident on Friday, August 20, 2021. He leaves behind his loving wife of 14 years, Brianne (Blout) Satorius, and their two children,... View Obituary & Service Information

The family of Brian Matthew Satorius "Opie" created this Life Tributes page to make it easy to share your memories.

Send flowers to the Satorius family.