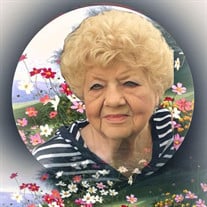 Carol E. Petty, 84, of Havana, passed away at Graham Hospital, in Canton, at 2:54 a.m., on Thursday, July 1, 2021. She was born January 10, 1937, in Peoria, Illinois, to Frank and Hazel (Beard) Cameron. She married Arthur Dean Petty in October, 1967, in Havana. He survives. Mrs. Petty is survived by her husband, Arthur Dean Petty, of Havana; one son: Gary Petty of Havana; as well as one brother: Bob (Nancy) Cameron, of Henderson, Tennessee. She was preceded in death by her parents; one brother: Rick Cameron and one daughter: Barbara Hedden. Mrs. Petty was a member of Central Christian Church and later Church of Christ, both in Havana. She was a member of the Red Hat Society. She had worked for Oney’s and IGA, in Havana. She also taught ceramics to many people in the Havana area. She was the owner of Merle Norman Studio and Carol’s Nails, as well as working as an Avon saleswoman. She was a lover of all animals, and was known to take in any cat, duck, goose, or chicken that needed a good home. Visitation will be held from 5:00 until 7:00 p.m., on Wednesday, July 7, 2021, at Hurley Funeral Home in Havana. Funeral services will be held at Havana Church of Christ, on Thursday, July 8, 2021, at Noon. Rev. Bill Boyce will officiate. Burial will follow the services at Laurel Hill Cemetery, in Havana. Memorial contribution may be made to American Cancer Society, St. Jude’s Children’s Research Hospital, or to the donor’s choice. Online memorial messages may be left for the family at www.hurleyfh.com. Hurley Funeral Home in Havana is in charge of arrangements.

The family of Carol E. Petty created this Life Tributes page to make it easy to share your memories.

Send flowers to the Petty family.