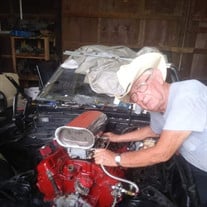 Danny Lee Ramsey, 74, of Easton, passed away at his home at 6:08 a.m., on Monday, November 1, 2021. He was born May 26, 1947, in Canton, Illinois, to James and Betty (Zinn) Ramsey. He married Sandra Buchanan, the mother of 2 of his daughters, in 1967. He later married Earla Jean Pfeiffer on May 28, 1977. She preceded him in death on March 17, 2001. He married Jimmi Miles on October 13, 2020. She survives. Mr. Ramsey is survived by his wife, Jimmi Miles, of Easton; two daughters: Stephanie Courier, of Muscatine, Iowa, Tammie (Scott) Mitchell, of Ashland, Illinois; four step-children: Jerry Moll of Pekin, Robert (Tina) Moll of Montana, Danny (Yoko) Kato, of Pekin, and Jessica (Kyle) Miles-Diaz, of Florida; as well as several grandchildren and great-grandchildren. Also surviving are four siblings: Ron Ramsey of Forest City, Sharon Kay (Kenny) Simpson, of Manito, Sue Treat of Easton, Tina Buzick, of Manito; as well as his beloved companions, Shadow, Nikki and Sonny. He was preceded in death by his wife, parents, and step-daughter, Lori. Mr. Ramsey served in the US Army, during the Vietnam War, from 1967-1973. He retired from Caterpillar Inc., in Morton, in 2000. He had most recently worked in the saw room. He enjoyed horseback riding, working on cars, and fishing. Graveside services will be held at Laurel Hill Cemetery, in Havana, at 1:00 p.m., on Friday, November 5, 2021. Military rites will be provided by VFW Post #6408 and American Legion Post #138, in Havana. Memorial contributions may be made to Pets Without Parents. Online memorial messages may be left for the family at www.hurleyfh.com. Hurley Funeral Home in Havana is in charge of arrangements.

The family of Danny Lee Ramsey created this Life Tributes page to make it easy to share your memories.

Send flowers to the Ramsey family.