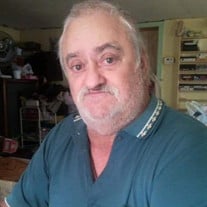 David Paul “Camel” Kuhlman, 74, of Havana, passed away at Mason District Hospital, in Havana, at 1:00 a.m., on Tuesday, February 1, 2022. He was born July 2, 1947, in Beardstown, Illinois, to Paul Chris and Mary Ann (Pherigo) Kuhlman. He married Patty Turner on April 30, 1983. She survives. Mr. Kuhlman is survived by his wife, Patty, of Havana; six children: James Ray (Heather) Kuhlman, of Princeton, Illinois, Jason Jones of Havana Diane Jones, of Havana, Michelle (Joseph) Menchaca, of Arizona, Jennifer (Ben) Schoonover, of Kilbourne, and Sarah Lane-Mitchell of Havana; as well as many grandchildren and great-grandchildren. Also surviving is one sister, Mary Joyce Smith of Havana. He was preceded in death by his parents, two sons: Juston Jones and Jerry Paul Kuhlman; four grandchildren: Daniel Kuhlman, Jesse Maberry, Devin Jones and Kimber Jones, as well as great-granddaughter Oaklynn; and three siblings: Shirley Ann Gilpin, James Kuhlman and Connie Kuhlman. Mr. Kuhlman was a CB enthusiast with the handle of “Camel.” He enjoyed spending time with his family and working on lawnmowers. He worked for Dana-Atwood, in Havana, for seventeen years and also at Specketer Hog Farm for two years. Funeral services will be held at Hurley Funeral Home in Havana, on Saturday, February 5, 2022 at 1:00 p.m., with visitation one hour prior to the services. Rev. Randy Green will officiate. Burial will follow the services at Laurel Hill Cemetery in Havana. Memorial contributions may be made to the donor’s choice. Online memorial messages may be left for the family at www.hurleyfh.com. Hurley Funeral Home in Havana is in charge of arrangements.

The family of David Paul Kuhlman created this Life Tributes page to make it easy to share your memories.

Send flowers to the Kuhlman family.