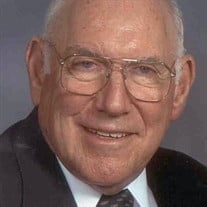 Dorland Worth Smith of Havana, devoted husband, father, grandpa, and Papa passed away peacefully on Thursday, March 11, 2021, at Advocate Condell Hospital in Libertyville, IL. Dorland (or “Worth”) was born on June 16, 1931, in La Porte, IN, to Dorland and Dorothy (Hulce) Smith. He married Marilyn Koke at St. Paul’s Lutheran Church of Havana on November 16, 1958. Mr. Smith is survived by his wife of 62 years; daughter Lisa (Robert) Olson of Cincinnati, OH; son Eric (Lisa) Smith of Grayslake, IL; daughter Lynn (Michael) Marassa of Grayslake, IL; and 7 grandchildren. He was preceded in death by his parents and his brothers Irvin D. Smith and William J. D. Smith. After spending his childhood in northern Indiana, Worth’s family moved to rural Topeka, IL, in 1945 where they farmed. He graduated from Easton High School in 1949. He was attending Western Illinois University when he was drafted into the United States Army reaching the rank of lieutenant. After serving in the Korean War, he returned to school at the University of Illinois at Urbana-Champaign graduating with a degree in agricultural engineering. Dorland was hired by Menard Electric Cooperative in Petersburg, IL, and worked there for over 40 years retiring as manager in 1999. Mr. Smith was active in many organizations over the years. He was a member of St. Paul’s Lutheran Church in Havana where he served in many roles including chairman of the congregation, elder, and treasurer. He was active in the Mason County Historical and Genealogical Society, the American Legion Post #138 in Havana, the VFW Post #6408 in Havana, the Illinois Water Authority Association, the Mahomet Aquifer Consortium, and the Imperial Valley Water Authority. God and his family were the center of his world. When he retired, Worth and Marilyn became full time babysitters for two of their granddaughters and spent many years attending events for all of their grandchildren. They also traveled to visit family and friends throughout the country. He supported his family in countless ways and will be greatly missed by all of them. The funeral will be held at St. Paul’s Lutheran Church in Havana on Saturday, March 20, 2021, at 11:00 AM with visitation starting at 10:00. Interment will be at Laurel Hill Cemetery in Havana. Memorial contributions can be made to the American Legion Post #138 in Havana or St. Paul’s Lutheran Church in Havana. Hurley Funeral Home in Havana is in charge of arrangements.

Dorland Worth Smith of Havana, devoted husband, father, grandpa, and Papa passed away peacefully on Thursday, March 11, 2021, at Advocate Condell Hospital in Libertyville, IL. Dorland (or &#8220;Worth&#8221;) was born on June 16, 1931, in La... View Obituary & Service Information

The family of Dorland Worth Smith created this Life Tributes page to make it easy to share your memories.