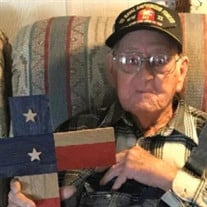 Edward Lewis Sathoff, 96, of Atterberry, Illinois, passed away on Sunday, May 15, 2022, at Sunny Acres Nursing Home. He was born on April 16, 1926, in Beardstown, Illinois, the son of Boyd “Tot” and Elsie (Edwards) Sathoff. Edward married Gladys (Mercedes) Golliher on July 28, 1946, in Tallula, Illinois. Edward was preceded in death by his wife, Mert; and two sons, Ronald Eugene (Wendy) Sathoff and Edward Wayne (Esther) Sathoff. He is survived by his daughter Susan Darlene (Dennis) Walker of Havana, Illinois; six grandchildren, Brian (Diana) Thompson, Erika (Phil) Foster, Charles (Nicole) Sathoff, Joshua Sathoff, Kimberly (Sam) Susko and John (Chelsea) Sathoff. Edward was a veteran of World War II serving in the Navy. After his honorable discharge in 1946, he engaged in trucking and farming with his dad, Boyd. He is best remembered by working on various pieces of farm equipment with implement dealers in the area. Even in his later years he would talk about farmers calling and asking questions about how to fix this and that. He very much enjoyed helping people. He was an avid gardener and loved working in his yard. He enjoyed working with wood in his shop. He also enjoyed fishing, bowling, board games and cards. He loved his fish and fried chicken meals. He was a member of the VFW and American Legion. He was also a member of the Atterberry Baptist Church. A visitation will be held on Monday, May 23, 2022, from 10 am to 11 am at Hurley Funeral Home in Petersburg. A committal service will be held following visitation at Camp Butler National Cemetery beginning at 12 pm with Pastor Abraham Mogerman officiating. The Menard County Inter Veterans will be performing military rites. Memorial contributions may be made to St. Jude’s Hospital, 501 St. Jude Place, Memphis, Tennessee 38105-9959. Please visit Edward’s online obituary at hurleyfh.com to share memories and condolences with his family. Hurley Funeral Home in Petersburg is assisting the family with final arrangements.

The family of Edward Lewis Sathoff created this Life Tributes page to make it easy to share your memories.

Send flowers to the Sathoff family.