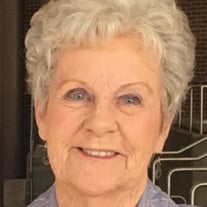 Elizabeth “Liz” Ann Ryan, 84, of Petersburg, IL passed away on Tuesday, April 6, 2021 at 2:30 AM at Sunny Acres Nursing Home in Petersburg, IL. She was born on November 3, 1936 in Springfield, IL to Gerald R. and Elizabeth (Johnson) Brown who preceded her in death. She married Ralph L. Huffman in 1955 who also preceded her in death. She later married retired Lt Cmrd George H. Ryan and spent over 40 years with George traveling the world and all 50 states. He preceded her in death in 2013. Liz is survived by her sons, Scott R. (Teresa) Huffman of Peoria, IL, and David B. (Barbara) Huffman of Ashmore, IL; five grandchildren; five great grandchildren; one great great grandchild; one sister, Jody VanNattan of Petersburg, IL; and one brother, Gerald “Jerry” R. (Pam) Brown Jr. of Petersburg, IL. Liz was Salutatorian in the 1954 class at Waverly High School in Waverly, IL. She was a homemaker and also a longtime volunteer with over 24 years in the research library as the first smiling face many thousands would see at the Pensacola National Aviation Museum in Pensacola, FL and had dedicated more than 4150 hours. Liz retired May 25, 2017 and received a Certificate of Exceptional Performance for her many years of service. She was an avid golfer achieving the Women’s Top Flight Club Championship at Shambolee Country Club. Liz loved, raised and showed horses/ponies including the 1966 National Champion Shetland Pony “Curtain Call”. Liz was an eternal optimist with an infectious smile until her last breath. Per Elizabeth’s wishes, cremation rites have been accorded and there will be a graveside service at Rose Hill Cemetery in Petersburg, IL on Saturday, May 22, 2021 at 2:00 PM. Chaplain Ellen Anderson with Kindred Hospice will officiate. A Celebration of Life will be held at 3:00 PM immediately following the service. Memorials may be made to SIU School of Medicine to help further their research of Alzheimer’s Disease. Online condolences may be left for the family at www.hurleyfh.com Hurley Funeral Home in Petersburg, IL is assisting the family with arrangements.

The family of Elizabeth "Liz" Ann Ryan created this Life Tributes page to make it easy to share your memories.

Send flowers to the Ryan family.