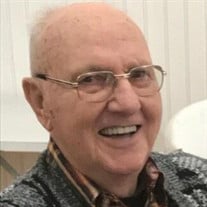 Enoch "Slim" Ahlfield, 91, of Mason City, Illinois passed away on November 20, 2020. He was born on March 5, 1929 in West Salem, Illinois to Edwin Henry and Harriet Dorothy (Knakmuhs) Ahlfield. Enoch is survived by his children, Connie (Donald) McLaughlin, Steven (Kay) Ahlfield, and Janet Stanley; grandchildren, Jeremiah McLaughlin, Nate (Brianne) McLaughlin, Megan (Eric) Glatt, Cory Ahlfield, Kyle Ahlfield, Zach (Rachel) Stanley, Sarah (Jacob) Reeves, and Anna Stanley; great-grandchildren, Owen McLaughlin, Wyatt McLaughin, Emmett McLaughlin, Avyana Glatt, and Garrett Glatt; brothers, Jim Ahlfield and Herman (Mary) Ahlfield; and numerous nieces and nephews. He was preceded in death by his wife, Edna (Mieure) Ahlfield; his son, Alan Paul Ahlfield; and eleven siblings. Enoch attended a one room school house in the farm country near West Salem and left home at age 13 so he could continue attending school in Olney. By working after school and at night sweeping floors in a drugstore, shining shoes at a pool hall, bellhopping at the hotel, working at the dry cleaner, and laboring at the ice house, he made enough money to eat and rent a room while attending school. At age 17, he enlisted in the Army. He served from 1946 to 1948, primarily as an Army clerk at Los Alamos, New Mexico for the wind up of the Manhattan Project. Enoch and his wife, Edna, were married on April 15, 1949 in Olney, Illinois. Enoch had many jobs in his lifetime. He worked as an oil well driller and tester in Wyoming, Utah, and Montana in the 1950s; he was a barber and coal miner in Springfield and Pawnee, Illinois from 1960 to 1990. Post-retirement work included stints as a night janitor at SIU Medical School, as an asbestos removal crew member, and buying/managing a motel in Mason City. He saw every job as a new adventure and as a challenge to be mastered. He was a hard worker with an exceptionally strong work ethic - something he expected from others, regardless of the type of work required. Enoch had many interests. In his younger years, he liked to fish and hunt. He loved to talk with people and found common interests with each person that often resulted in long conversations and lasting relationships. He enjoyed telling stories and jokes and was quick to smile and laugh. He liked getting a “good deal” and found great enjoyment in going to farm sales and auctions to find great treasures. He was a loving father, grandfather, and great-grandfather and took great pride in his family's achievements, professionally and academically. Enoch was their biggest fan, no matter what their interests were at the time. A celebration of life will be held at a later date with graveside services at Camp Butler National Cemetery. Memorial donations may be made to the charity of one’s choosing. Online condolences may be left for the family at www.hurleyfh.com. Hurley Funeral Home in Mason City is in charge of arrangements.

Enoch "Slim" Ahlfield, 91, of Mason City, Illinois passed away on November 20, 2020. He was born on March 5, 1929 in West Salem, Illinois to Edwin Henry and Harriet Dorothy (Knakmuhs) Ahlfield. Enoch is survived by his children, Connie (Donald)... View Obituary & Service Information

The family of Enoch "Slim" Ahlfield created this Life Tributes page to make it easy to share your memories.

Send flowers to the Ahlfield family.