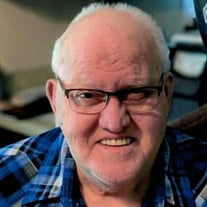 Gale “Gomer” Eugene Banister, 76, of Athens, Illinois, passed away on Sunday, September 19, 2021, at Regency Care in Springfield, Illinois. He was born July 13, 1945, in Greenview, Illinois, the son of Alvin and Artie (Conn) Banister. He married Alice Ussery on August 14, 1971, in Waterford, Michigan. Gale was a proud veteran that served our grateful nation in Viet Nam in the U.S. Army from March 29, 1967, to October 3, 1971. After the military he worked for General Motors for 30 years before retiring. He was an avid model car, dog figurine and movie collector. He also loved to watch old television shows such as Mash, The Andy Griffith Show and Gomer Pyle to name a few. Gale is survived by his wife, Alice; his children, David (Shelia Soul) Banister of Connecticut, Darwin (Angela) Banister of Michigan, Shawn (Kelly) Banister of Michigan, and Helen (Brian) Rector of Illinois; a brother, Ronald Banister; a sister in law, Mable Banister; six grandchildren, David, Danny, Jessica, Michael, Joshua and Cooper; two great grandchildren, one of which is one the way and due November 2, 2021; many nieces and nephews; and a long-time friend, Floyd (Linda) Walker. Gale was preceded in death by his parents; six siblings; and a granddaughter, Summer. A memorial gathering will be held on Friday, September 24, 2021, at Hurley Funeral Home in Greenview, Illinois, from 10 am to 11 am. The memorial service will begin at 11 am with Pastor Rob Gallion officiating. A graveside service will immediately follow at Elmwood Cemetery in Greenview. The Menard County Inter Veterans Ceremony Unit will be performing military rites. Memorial contributions may be made to St. Jude Children’s Hospital, 501 St. Jude Place, Memphis, Tennessee 38105. Hurley Funeral Home in Greenview is assisting the family with final arrangements.

The family of Gale Eugene Banister created this Life Tributes page to make it easy to share your memories.

Send flowers to the Banister family.