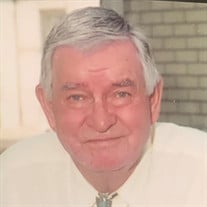 Jack L Depoy Sr., 88, of San Jose, IL passed away on July 11, 2021 at his home.   He was born on January 29, 1933 in Colchester, IL to Odell and Weltha (Powell) Depoy. Jack married Ruby “Irene” Whelchel on January 1, 1953 in Albuquerque, New Mexico. Jack is survived by 5 children: Vicki Watkinson of Warrenton, MO, Julie (Jeff)Doyle of Mason City, IL, Jack (Carla) Depoy, Jr. of Lincoln, IL, Penny (Bill) Durdle and Kelly (Mike) Hammel of San Jose, IL. He has 12 grandchildren and 28 great-grandchildren. Jack was preceded in death by his parents, his wife Irene in 2018, 5 siblings: Darold Depoy, Wynoa Depoy, Junior Depoy, Juanita Dorethy, Eloise Wear, son-in-law Tom Watkinson and his granddaughter, Shannon Hammel.  He served in the United State Army and retired from Keystone as a millwright in 1987. He enjoyed fixing lawn mowers and mechanical work, old time tv shows and listening to country music, but he enjoyed spending time with family and friends the most.    Cremation rites have been accorded and a celebration of life for Jack will be held at a later date. Memorial contributions may be made to San Jose Fire and Rescue.  Online condolences may be left for the familyat www.hurleyfh.com Hurley Funeral Home in Mason City is assisting the family with arrangements.

The family of Jack Depoy Sr. created this Life Tributes page to make it easy to share your memories.

Send flowers to the Depoy family.