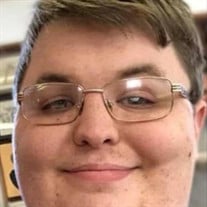 Jeremiah “Bull Frog” Johnson, 31, of Green Valley passed away at 8:40 a.m. on Thursday, September 9, 2021 at his home. He was born on June 20, 1990 in Pekin to William Sr. and Donna (Fuller) Johnson. Surviving are his mom, Donna Johnson of Green Valley; two brothers, William Jr. and Austin Johnson, both of Green Valley; one sister that he adored, Julie (Justin Scroggs) Williams; two nieces, Aireonna (Devin Davis) Williams and Kayleigh Whitney, all of Pekin; six nephews, Joel, Gabe (Anna), Keagan Williams, William (Aly) Callaway and Bentley Scroggs, all of Pekin, and Garrett Johnson of Wisconsin; five uncles, Randy, Del, Garry, Rick, and Keith; eight aunts, Pammie Sue, Debbie, Connie, Iva, Sandy, Rita, Karen, and Pat; 43 plus cousins; and 54 plus second cousins. He was preceded in death by his dad, William Sr.; brother, Greg Johnson; two aunts, Patty Berry and Nancy Hill; four uncles, Ronnie Fuller, Larry Fuller, Dick Johnson, and Bob Johnson; and two cousins, Vincent Fuller and Jake Barding. Jeremiah graduated from Pekin Community High School in 2009. He worked at McDonald’s in Pekin with the help of a work aide until his autism made work too hard for him. Jeremiah was so full of life. He loved to play his Playstation and watch animated shows and movies with his oldest brother, Bill. He had the biggest heart and loved to show his love to everyone! He didn’t have to know you to be able to make you smile by the end of your conversation. He loved being an uncle and telling everyone about his nieces and nephews every chance he could. He would always talk to you about his video games and shows. He has a very large family and loved to tell everyone just how big his family is. He always had a smile on his face and was just a happy soul. A funeral service will be held on Thursday, September 16, 2021 at 10:00 a.m. at Maas-Hurley Funeral Home in Manito. Visitation will be held one hour prior to the service from 9:00 a.m. to 10:00 a.m. Burial will follow in Spring Lake Cemetery. Memorial donations may be made in Jeremiah’s name to his family. Online condolences can be left for his family at www.hurleyfh.com. Maas-Hurley Funeral Home in Manito is in charge of arrangements.

The family of Mr Jeremiah "Bull Frog" Johnson created this Life Tributes page to make it easy to share your memories.

Send flowers to the Johnson family.