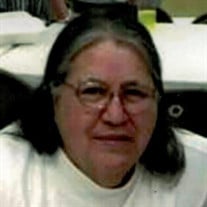 Jessie Berniece (Nichelson) Leinberger left her beloved family on the 31st of January 2021.She was born June 5, 1951 in Hannibal, MO to Jesse Ernest and Berniece Maxene (Johnson) Nichelson. At the age of 12, she moved to Chandlerville, IL to live with her Uncle Howard and Aunt Margaret Johnson after the death of her parents. It was here that she met her husband, Edean, while attending Chandlerville schools. They were married June 11, 1972 at the Chandlerville United Methodist Church and spent 48 years together. They raised three sons and have five grandchildren. She started work at Capital Records in Jacksonville after graduating high school. She worked there until 1975 and made many dear friends during that time. After her children were grown, she cleaned houses for many local people. She enjoyed the work and was thankful for the relationships she made. Her favorite job though was babysitting especially for her grandchildren. Her joys in life were her children and grandchildren. She enjoyed attending many sporting events (basketball, baseball, softball, & volleyball) to cheer and support them. She loved cooking her family’s favorite dishes any time of year but especially at the holidays. She was known for her holiday cookie trays and spent many fun filled hours with her family making the cookies. She is survived by her loving husband, Walter “Edean” Leinberger; her sons: Joe (Della) Leinberger of Chandlerville; Jason (Lizzy) Leinberger of Hillsboro, OR; and Josh Leinberger of Chandlerville; her grandchildren: Kaylee & Lucas Leinberger; Artie & Ruby Leinberger; Elliott Leinberger ; her brother-in-law, Eldon (Dena) Leinberger; her cousin / sister of the heart, Janna (Matt) Zachary as well as many nieces and nephews.She was preceded in death by her parents, her brothers, Harold “Hud” Nichelson & Harry Nichelson, her sister, Bertha “Bert” (Nichelson) Davies, and her half-brother, James “Jim” Nichelson. The funeral will be held, Thursday, February 4th at 11:00am at the Lintner-Hurley Funeral Home in Chandlerville, Illinois. Visitation will be from 10:00am until services. Burial will follow at Chandlerville Cemetery. In lieu of flowers, the family asks that memorials be made to St Jude’s Children’s Research Hospital or the Chandlerville Cemetery. Online condolences may be left for the family at www.hurleyfh.com Lintner-Hurley Funeral Home in Chandlerville is assisting the family with arrangements.

Jessie Berniece (Nichelson) Leinberger left her beloved family on the 31st of January 2021.She was born June 5, 1951 in Hannibal, MO to Jesse Ernest and Berniece Maxene (Johnson) Nichelson. At the age of 12, she moved to Chandlerville, IL to... View Obituary & Service Information

The family of Jessie B. Leinberger created this Life Tributes page to make it easy to share your memories.

Send flowers to the Leinberger family.