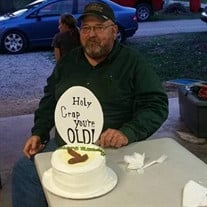 John Charles Briar, 75, of Virginia, passed away at home, on his family farm, which had been in his family since 1849, at 1:00 p.m., on Friday, February 4, 2022. He was born March 15, 1946, in Jacksonville, Illinois, to Earl Clark and Dorothy Isabelle (Smith) Briar. He married Mary Lou Beard in 1965. While they later divorced, they remained friends throughout the years. Mr. Briar is survived by two children: Aaron Briar of Chandlerville, and Heather Collins of Beardstown; two grandchildren: Levi Atterberry and DaLana Tribble; and four great-grandchildren. He was preceded in death by his parents. Mr. Briar graduated from Chandlerville High School in 1964. He later earned an Associate’s Degree from Lincoln Land Community College when he was in his 50’s. He liked to take classes and learn different things, even taking a welding class with his grandson, Levi. He started his career working for Besco as a Sound Man. He set up sound systems for county fairs and the Florida State Fair. On one occasion he was in charge of the sound for Roy Clark. He owned and operated Briar TV and Appliance, in Virginia, until selling the business in the 1970s. He then farmed until 1986. He then opened Sangamon Coachworks Body Shop. He later worked at RAC Adjustments until his retirement. In retirement, he enjoyed riding his motorcycle all over the United States and into Canada. He had served as a Sangamon Valley Township Trustee and as Commissioner of Jobes Creek Drainage District. He was a 50 year member of Virginia Masonic Lodge #544 as well as the Beardstown Elks Club. He enjoyed woodworking, building clocks and rolltop desks, and restoring old furniture. He also liked to work on old cars. His most recent project was the restoration and modernization of a 1950 Ford Woody wagon. A memorial service will be held at Sangamon Valley Presbyterian Church, on Saturday, February 12, 2022, at 11:00 a.m. Visitation will be held two hours prior to the service at the church. A Celebration of Life will be held by the family at a later date. Rev. Tim Bauler will officiate. Memorial contributions may be made to Cass County Home Health Visiting Nurses. Online memorial messages may be left for the family at www.hurleyfh.com. Lintner-Hurley Funeral Home in Chandlerville is in charge of arrangements.

The family of John Charles Briar created this Life Tributes page to make it easy to share your memories.

Send flowers to the Briar family.