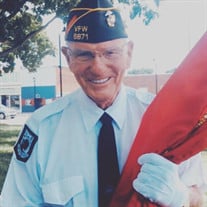 John “Bud” William Youle Jr., 82, of Petersburg, Illinois, passed away on Friday, June 5, 2020, at his home. He was born on June 18, 1937, to John and Ardean (Farris) Youle in Hannibal, Missouri. He married Beth Hicks in Hannibal on December 23, 1959. Bud graduated high school in 1955 before attending Missouri Valley College in Marshall, Missouri, graduating with a Bachelor’s Degree in Economics in 1959. He then served our grateful nation in the Marine Corps from 1959 to 1963. In 1963, he joined International Harvester, which later became J.I. Case, as a National Sales Manager before retiring after 32 years. Bud was a member of the First Christian Church in Petersburg where he served on the church board. He was a member of the VFW Post 6871 and was a member of the Stock Club where he served as the President of the Coffee Club. He loved gardening, farming, baseball, and traveling to California every year. He was an American history buff, kept up with politics and the stock market and was an avid speaker for J.I. Case. Bud is survived by his wife of 60 years; two daughters, Amy Beth (husband Tony) Santi of Western Springs, Illinois, and Julie Lenoch of Salt Lake City, Utah; four grandchildren, Rachel Lenoch, Justin Lenoch, Joshua Santi and Jake Santi; and a sister, Yvonne (husband Russell) Youle-Herring. Bud was preceded in death by his parents and a son-in-law. Due to the COVID-19 uncertainty, there will be a private family service held at First Christian Church in Petersburg with Pastor Rick Williams officiating. A private family graveside service and military burial rites will be held at Grandview Burial Park in Hannibal, Missouri. The family will be hosting a memorial gathering planned for late July which will be announced when a date and time are determined. Memorial contributions in Bud’s name may be made to the Wounded Warrior Project, P.O. Box 758517, Topeka, Kansas 66675 or by visiting https://support.woundedwarriorproject.org/default.aspx?tsid=10043&ovr_acv_id=5246. Please visit Bud’s online obituary at hurleyfh.com to leave condolences and share memories.

The family of John "Bud" William Youle Jr. created this Life Tributes page to make it easy to share your memories.

Send flowers to the Youle family.