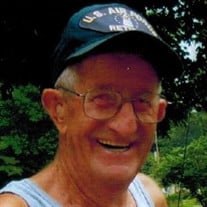 John B. Tibbs, 85, of Petersburg, IL passed away on July 4, 2021 at 3:48 AM. He was born in Fairfield, IL on December 6, 1935 to Charles and Dorothy (Hooper) Tibbs. He married Deloris Padgett on July 15, 1957. John is survived by one son, John (Lora) Tibbs of Petersburg, IL; five grandchildren, Kylea (Nathan) Tibbs-Hnizdo, Kara (John) Claussen, Ryan Edwards, Josh Edwards, Kelsey Tibbs; ten great grandchildren, Isaac, Lucas, & Samuel Hnizdo, Travis Phares & Ana Edwards, Andrew & Zakk Edwards, Owen Smith & Maren Somers; his siblings, Ronald Tibbs, Walter Tibbs, Delbert Tibbs, Thomas Tibbs, Robert Tibbs, and Rosie Dixon. He was preceded in death by his wife, Deloris; his parents; one son, Kenneth Tibbs; one daughter, Cindy Tibbs; and his siblings, Billie Tibbs, Jeannie Borah, Clidella Graves, Vandarell Tibbs, Laura Wynn, LouElla Clark, and Hank Tibbs. John served in the Air Force for 22 years. He later worked as a salesman for FS for more than 20 years, drove cars for Knous Motors, and worked for Heubner Tires after he retired. He was a member of the ANSAR Shrine Clown Unit and was known as “Loafer”. He was also a member of the Masons. John was always active in Boy Scouts while his children were growing up. He was a member of a motorcycle club and enjoyed hunting, fishing, and camping. A funeral service will be held for John on Saturday, July 10, 2021 at Hurley Funeral Home in Petersburg, IL at 11:00 AM. Visitation will be held from 10:00 AM to 11:00 AM also at the funeral home. Pastor Darren Palmer will officiate. Burial will follow at Oakland Cemetery in Petersburg, IL. Memorials may be made to the Shriner’s Hospital. Online condolences may be left for the family at www.hurleyfh.com Hurley Funeral Home in Petersburg, IL is assisting the family with arrangements.

The family of John B. Tibbs created this Life Tributes page to make it easy to share your memories.

Send flowers to the Tibbs family.