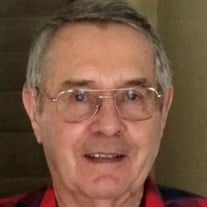 John Whitaker, 88, of Forest City, IL passed away on Wednesday, January 19, 2022, at his home. He was born June 20, 1933 in Forest City, IL, the son of Floyd and Lillie (Langston) Whitaker. In 1958, he married his true love, Loretta Warner of Forest City, IL and she preceded him in death on April 18, 2017. John is survived by his three children, Todd Whitaker of Franklin Grove, IL; Shari (John) Modica of Nixa, MO; Jodie (Steve) Koch of Chatham, IL, five grandchildren, Shannon Braida of Nashville, TN; Michael (Holly) Braida of Overland Park, KS; Carter (Tamra) Modica of Nixa, MO; Eric Modica of Nixa, MO, and Nancy Modica of Nixa, MO. Also surviving are sisters, Mary Clinebell of Pekin, IL; Barbara Leesman of Mason City, IL; brother and sister-in law, Dwight and Jacque Whitaker of Forest City, IL and Nancy Longmeyer of Rockbridge, IL. In addition to his wife and parents, John was preceded in death by two brothers and two sisters. John was a graduate of Forest City High School in 1951. He then graduated from the University of Illinois with a degree in Ag Engineering. He grew up on the family farm and continued farming in the Manito and Forest City area with his wife, Loretta, until he retired in 1999. He grew soybeans, green beans, seed corn, popcorn, wheat and rye. He was a member of the Community United Methodist Church of Manito and a member of the Illinois Farm Bureau. He was a devoted husband, father and grandfather and will be greatly missed. A private service was held by the family with Pastor Steve Oaks presiding and John was laid to rest in Meadow Lawn Cemetery next to his wife, Loretta. Memorial contributions may be made to the Community United Methodist Church, 109 S Washington St, Manito, IL 61546. Please visit www.hurleyfh.com to leave messages and condolences for the family.

The family of John Whitaker created this Life Tributes page to make it easy to share your memories.

John Whitaker, 88, of Forest City, IL passed away on Wednesday,...

Send flowers to the Whitaker family.