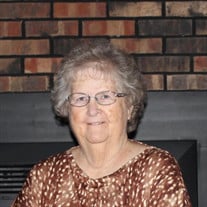 Judith Kay Henry (nee Eilers) 80 of Chandlerville, Illinois, went to be with the Lord June 12, 2022. She was born June 7, 1942 in Peoria, Illinois. She graduated from Chandlerville High School in 1960. She married Fred Allan Henry on October 2, 1960 at the Chandlerville Christian Church. She was a beloved wife, mother, grandma, great-grandma, sister, and aunt. She was baptized at the Chandlerville Christian Church. She worked at Vollmer’s Grocery that became Brown’s Market for about 20 years. The most joy she got out of life was being a Mom, Grandma, and JuJu. She is survived by her children Dena Leinberger (Eldon), Diana Vaughn (Matt), Delana Cloninger (Todd), Lonnie Henry (Ann) all of Chandlerville, Illinois and Carrie Jo Donnan (Kevin) of Peterburg, Illinois; 12 grandchildren Justin Leinberger (Jenny), Jade Cave (Clint), Jalen Leinberger, Kyla Whitehead (Cole), Kallie Edge (Daniel), Raya Jokisch (Logan), Ross Cloninger (Bryanna), Alexis Henry, Sydnee Wallace (Kyle), Anna Henry, Trace and Nash Donnan; 11 great- grandchildren Cooper and Presley Leinberger, Kendal, Jace and Jaxson Cave, Carter, Brody and Kate Whitehead, Adelyn and Ember Edge, Wyatt Wallace and Baby Jokisch on the way; brother Dean Eilers (Georgia); brother-in-law Paul “Duke” Blair, and numerous nieces and nephews. She was preceded in death by her husband, parents, LaVerne and Anna Eilers (nee Hillen), sister, Verna Blair, grandson, Caleb Vaughn, granddaughters, Kelsey Vaughn, and Trista and Shayla Donnan. Judy’s house was the central meeting place for all her kids, grandkids and great-grandkids. When you stopped in you would usually get to visit with grandma, aunts, uncles, and cousins, too! It would not be a stop without getting something to eat-a cookie, a tootsie roll, potato chips, something sweet or a meal. The highlight of her day was her visitors at lunch. She loved going to her kids and grandkids activities and eating out. Recently, she “stayed in” but watched Trace and Nash’s baseball games on GameChanger and ordered out from her favorite restaurant, Hollywood’s. Visitation will be held on Thursday, June 16th from 4:00 - 7:00 p.m. at Lintner-Hurley Funeral Home in Chandlerville, Illinois. Funeral Services will be held on Friday, June 17th at 10:00 a.m. at Lintner-Hurley Funeral Home with Burial at Chandlerville Cemetery. In Lieu of flowers, memorials can be sent to Chandlerville Cemetery.

Judith Kay Henry (nee Eilers) 80 of Chandlerville, Illinois, went to be with the Lord June 12, 2022. She was born June 7, 1942 in Peoria, Illinois. She graduated from Chandlerville High School in 1960. She married Fred Allan Henry on October... View Obituary & Service Information

The family of Judith Kay Henry created this Life Tributes page to make it easy to share your memories.

Send flowers to the Henry family.