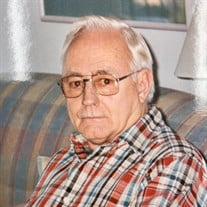 Larry George Tarvin, 90, of Havana passed away on Wednesday, April 14, 2021 at 6:30 a.m. at his home. He was born on January 9, 1931 in Havana to George and Helen (Bunch) Tarvin. He married Irene Palmer in Fulton County on September 2, 1950. She preceded him in death on April 11, 1999. Mr. Tarvin is survived by his son, Stephen Tarvin of Havana, brother, Ted Tarvin of Havana, sister, Paula DeWees of Canton, and several nieces and nephews. He was preceded in death by his parents, wife, and sister, Carole A. Palmer. Mr. Tarvin was a member of Isabel Church outside of Lewistown. He served in the U.S. Army from 1951 – 1952. He was owner and operator of Fabco in Havana where he held 2 patents in fabricating. He was a good dad who was dedicated to his family. He enjoyed nature, farming, wood carving, and building, which included building his own home. He treated people fairly and how he would want to be treated. Funeral services will be held on Monday, April 19, 2021 at 11:00 a.m. at Hurley Funeral Home in Havana, with a visitation one hour prior to the service from 10:00 a.m. to 11:00 a.m. Rev. Steve Hoover will officiate. Burial will follow the service at Laurel Hill Cemetery in Havana. Memorial donations may be made in Larry’s name to VFW Post #6408, American Legion Post #138, or Hospice Compassus. Online condolences can be left for his family at www.hurleyfh.com. Hurley Funeral Home in Havana is in charge of arrangements.

The family of Larry G. Tarvin created this Life Tributes page to make it easy to share your memories.

Larry George Tarvin, 90, of Havana passed away on Wednesday,...

Send flowers to the Tarvin family.