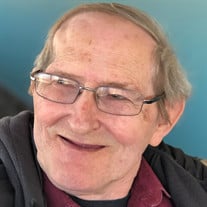 Lawrence John Lettimore Jr., 76, of Quincy, Illinois, passed away at Blessing Hospital in Quincy on May 13, 2020. He was born on December 29, 1943, the son of Lawrence John Sr. and Bessie (Turner) Lettimore in West Palm Beach, Florida. Lawrence was an alumnus of Jacksonville High School. After high school, he served our grateful nation in the Marines from 1963 to 1969 where he earned several medals and badges. He then worked as a Drafting Mechanical Engineer at Med Science in St. Louis, Missouri, and later R and R Bindery in Virden, Illinois. He was a member of the Prairie Temple Assembly of God in Virden, Illinois, where he belonged to the Promise Keepers, a men’s bible study and prayer group, and had a strong love for God. He was a very affectionate, charitable and strong man that never complained. He was a great dad and grandfather that knew how to love and be a good mentor to many people, especially to his children and grandchildren. He was an outdoorsman, liked to fish, a good artist and an excellent writer. Lawrence is survived by his ex-wife and good friend, Wanda Lettimore; a daughter, Angell (husband Scott) Mack of Petersburg, Illinois; two step daughters, Wanda Mielke of Wood River, Illinois, and Wanda (husband Carlos) Velez of Puerto Rico; a step son, Gary Lynn; eight grandchildren, Michael Lettimore of Sedalia, Missouri, Joel Lettimore of Petersburg, Illinois, Fallon Little of Camp Lejeune, North Carolina, Joseph Huntsman, Michael Mielke, Robert Mielke, Julimar (husband Edwin) Martinez Velez and Juan Velez; several great grandchildren; siblings, Robert Lettimore, Virginia Huffman, Joyce Gregory and Roger Lettimore; and many nieces, nephews, great nieces and nephews, great-great nieces and nephews and cousins. Lawrence was preceded in death by his parents; a grandson, Carlos Velez; a brother, Jimmy Lettimore; and two sisters, Beverly Lettimore and Edith Marsh. A private family viewing will be held with a private burial at Camp Butler National Cemetery immediately following. Memorials in Lawrence’s name may be made to the Illinois Veterans Home, 1707 N. 12th St., Quincy, Illinois 62301.

Lawrence John Lettimore Jr., 76, of Quincy, Illinois, passed away at Blessing Hospital in Quincy on May 13, 2020. He was born on December 29, 1943, the son of Lawrence John Sr. and Bessie (Turner) Lettimore in West Palm Beach, Florida. Lawrence... View Obituary & Service Information

The family of Lawrence John Lettimore Jr. created this Life Tributes page to make it easy to share your memories.

Send flowers to the Lettimore family.