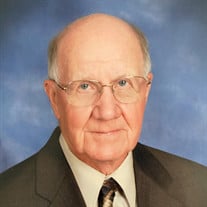 Melvin Esselman, 83, of Havana, passed away at Renaissance Care Center, in Canton, at 11:41 p.m., on Sunday, May 9, 2021. He was born November 3, 1937, to Herman and Florence (Holste) Esselman. He married Barbara Hall, on February 14, 1957, at St. Paul’s Lutheran Church in Havana. Melvin was a 1955 graduate of Havana High School. He farmed his entire life and took great pride in his ability to be a responsible steward of the land. Throughout his farming career he would often have a secondary job particularly throughout the winter months including working at Bonnett’s turkey farm, International Harvester, working as a carpenter with “Cap” Schmidt, and finally working many years as a custodian at Havana Community Schools. He was a man who believed in and valued hard work. Even in his final years of full retirement, he always had a project that would often allow him to work outside. Melvin is survived by his wife, Barbara, of Havana; one daughter: Vicki (Joe) Carr, of Fairfield, Iowa; two grandchildren that were his pride and joy: Katelyn (Brian) Steele, of Overland Park, Kansas; and Matthew Carr, of Des Moines, Iowa; as well as two great-grandchildren: Graham and Brooke Steele. Also surviving are his brother Nelson Esselman, sister Margaret Trimpe, both of Havana; cousin Carol Kolves, of Bath; sister-in-law Mary Stanfill, of Columbus, Georgia; sister-in-law Leona Bradley, of Havana; and several nieces and nephews. Melvin was a member of St. Paul’s Lutheran Church in Havana and Mason County Farm Bureau. He was also a multiple gallon American Red Cross blood donor. He was also a great fan of watching his grandchildren participate in their many sports activities. An open visitation will be held at Hurley Funeral Home in Havana, from 9:00 a.m., until Noon, on Thursday, May 13, 2021. The family will not be present. Graveside services will be held at Laurel Hill Cemetery, in Havana, at 3:00 p.m., on Thursday, May 13, 2021. Rev. Brian Lesemann will officiate. Memorial contributions may be made to St. Paul’s Lutheran Church in Havana or the Havana Public Library. Online memorial messages may be left for the family at www.hurleyfh.com. Hurley Funeral Home in Havana is in charge of arrangements.

The family of Melvin Esselman created this Life Tributes page to make it easy to share your memories.

Melvin Esselman, 83, of Havana, passed away at Renaissance Care...

Send flowers to the Esselman family.