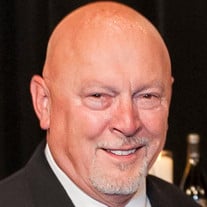 Michael “Vuj” Vujovich, 73, of Petersburg, IL, passed away Sunday, November 21, 2021. He was born in Forbach France on August 11, 1948 to Milonja and Hildegard (Boguschewski) Vujovich. Vuj is survived by his son, Michael (Caitlin Solomon) Vujovich of Washington, IL; and one sister, Petra (Jerry) Weller of Spring, TX. He was preceded in death by his parents; one son, John Harold Vujovich; and one sister, Desanka (Major) Brown. Vuj immigrated to the United States with his family in 1953. They settled in Chicago. After high school, Vuj enlisted in the Marine Corps and served in-country during the Vietnam War. After returning home, he earned a bachelor’s degree in law enforcement from Western Illinois University and a Juris Doctorate degree from John Marshall Law School in Chicago. As a career prosecutor with a 95%+ average conviction rate, Vuj served the State of Illinois in various roles. Vuj was an avid motorcycle rider and hunter, a lifelong supporter of the Marine Corps, and a treasured friend to many. Cremation rites have been accorded, and a visitation will be held for Vuj on Thursday, December 9, 2021, from 6 to 8 p.m. at Hurley Funeral Home in Petersburg, IL. A graveside service will be held at Camp Butler National Cemetery on Friday, December 10, 2021, at 11 a.m. Chaplain Joel Hobbick will officiate. Memorials may be made to the Vietnam Veterans of America. Online condolences may be left for the family at www.hurleyfh.com Hurley Funeral Home in Petersburg, IL, is assisting the family with arrangements.

The family of Michael "Vuj" Vujovich created this Life Tributes page to make it easy to share your memories.

Send flowers to the Vujovich family.