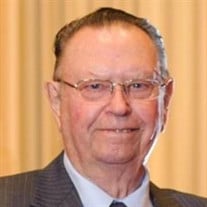 Morris L. Bell, 98, of Chandlerville passed away on 12:15 a.m. on Monday, June 13, 2022 at Passavant Hospital in Jacksonville. He was born on February 21, 1924 in Saidora, Illinois to Arthur O. and Hortense (Dadisman) Bell. He married Doris L. Schaub on March 14, 1948 in Mason City, Illinois. She preceded him in death on November 27, 2016. Mr. Bell is survived by three daughters: Rosanne (Darell) Sarff of Chandlerville, Kristine (Dennis) Lane of Lawrence, Kansas, and Lori (Steve) Turner of Chandlerville, nine grandchildren, thirteen great-grandchildren, and three great-great grandchildren. He was preceded in death by his parents, wife, sister, Virginia Bell, three brothers, A.O., John, and George Bell, and one great-grandson, Eli Schultz. Mr. Bell was a member of Fairview Methodist Church. He was a farmer for most of his life. He served on the Farm Bureau, Board of Menard Electric Cooperative, Imperial Valley Water Authority Board, and AIEC. He was a 4-H leader for many years and was on the church board. A visitation will be held on Thursday, June 16, 2022 from 5:00 p.m. to 7:00 p.m. at Hurley Funeral Home in Havana. Funeral services will be held on Friday, June 17, 2022 at 11:00 a.m. at Fairview Methodist Church outside of Bath, with another visitation one hour prior to the service at the church. Rev. Joe Tomich will officiate. Burial will follow the service at Fairview Cemetery. Memorial donations may be made in Mr. Bell’s name to Walker Nursing Home in Virginia or Fairview Methodist Church. Online condolences can be left for his family at www.hurleyfh.com. Hurley Funeral Home in Havana is in charge of arrangements.

Morris L. Bell, 98, of Chandlerville passed away on 12:15 a.m. on Monday, June 13, 2022 at Passavant Hospital in Jacksonville. He was born on February 21, 1924 in Saidora, Illinois to Arthur O. and Hortense (Dadisman) Bell. He married Doris... View Obituary & Service Information

The family of Morris L. Bell created this Life Tributes page to make it easy to share your memories.

Send flowers to the Bell family.