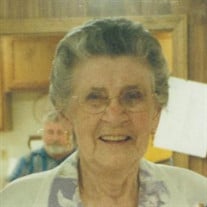 Pauline Phelps Lauderdale, 106, formerly of Glasford and Manito, passed away on Sunday, December 13, 2020 at Hopedale Nursing Home. She was born on August 8, 1914 in Grantsburg, Illinois to Roy O. and Molly Mae (Kerley) Phelps. She married Theo Hiram Lauderdale on September 1, 1933 in Glendale, Illinois. He preceded her in death on Mach 21, 1999 in Peoria. Surviving are two daughters, Patsy J. (Robert) Smith of Manito, Illinois and Barbara L. (Michael) Sullivan of Dunlap, Illinois. Also surviving are six grandchildren, six great-grandchildren, and four great-great grandchildren. She was preceded in death by her parents, her husband, granddaughter Kimberly (Smith) Kelly, her half-sister Lavina (Phelps) Rotola, and her half-brother Roy E. Phelps and his wife Barbara. Pauline was a skilled homemaker, gardener, and seamstress. In her later years she loved needlework, especially crocheting, as she made pieces of work as gifts for her family and friends. Pauline and Hiram spent most of their sixty-six years together in the Glasford community, where they were active in the Glasford United Methodist Church. After Hiram’s death she moved to Manito for a few years before taking residence in an apartment in Hopedale Assisted Living. After four years there, she spent the last eight years in the Hopedale Nursing Home. The family would like to thank the nurses and staff of the nursing home for their care and kindness. A private family graveside service will be held at Lancaster Cemetery in Glasford, Illinois. Rev. Steve Oaks will officiate. Online condolences can be left for the family at www.hurleyfh.com. Maas-Hurley Funeral Home in Manito is in charge of arrangements.

Pauline Phelps Lauderdale, 106, formerly of Glasford and Manito, passed away on Sunday, December 13, 2020 at Hopedale Nursing Home. She was born on August 8, 1914 in Grantsburg, Illinois to Roy O. and Molly Mae (Kerley) Phelps. She married... View Obituary & Service Information

The family of Pauline Lauderdale created this Life Tributes page to make it easy to share your memories.

Send flowers to the Lauderdale family.