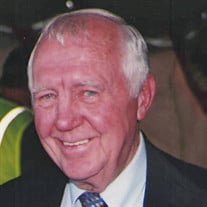 Philip H. Frederick, 92, of Manito, passed away at OSF-St. Francis Medical Center, in Peoria, at 5:44 a.m. on Tuesday, February 23, 2021. He was born December 28, 1928, in Manito, Illinois, to John and Stella (Fuller) Frederick. He remained a bachelor throughout his life. He was preceded in death by his parents; three brothers: James Frederick, Warren (Hazel) Frederick, John Jr. (Lorraine) Frederick, as well as one sister: Pauline (Ron) Wistehuff; and one brother-in-law: Barney Maupin. Surviving are his sister: Laura Maupin and fifteen nephews and nieces with families located throughout the country. Local Illinois relatives are: Dr. Richard Frederick, of Pekin, Debbie Veltman of Morton, Marian Gray of Pekin, Mike Wiestehuff of Forest City, Mike Frederick & Barbara Wertz of Tremont and Margo DeMay of Princeton. Phil graduated from Manito High School in 1946, winning the Athletic Award. He then attended Bradley University for two years, while employed part-time at Caterpillar Tractor Co. He proceeded to graduate from the University of Illinois, with a degree in Metallurgical Engineering and received a first place National Award from AIME for a project entitled "Casting Stainless Steel in Ceramic Molds." In 1950, he joined the US Air Force and participated in the development of Super Alloys for Jet Engines, used initially in Military Aircraft and subsequently in Commercial Aircraft. In 1953, he joined the country's largest Specialty Steel Corp., Allegheny Ludlum, in Albany, NY to further the development of aircraft materials. For the next 32 years, he traveled through all fifty states, China, Hong Kong and several European countries. After living in downtown Pittsburgh, PA and Buffalo, NY, he retired as Vice President of Sales and Marketing. In 1987, he purchased and operated Stormaster Door & Window in Saratoga Springs, NY, resuting in the salvation of 20 employee jobs. In 1999, he built a new manufacturing plant and changed the name to WinTech Systems, to provide income for 25 employees in Saratoga Springs. For his company's contributions, he received the 2004 "Manufacturer of the Year" award from the Small Business Development Center in New York State. In 2009, he sold the ongoing profitable company and moved back to Manito, where he built a log home. In 2012, Phil was elected President of the Manito Chamber of Commerce and continued pursuit of programs to enhance the town's economy. In 2015, he became Business Advisor for an international investment bank with headquarters in New York City. Later that year, he financed the new Frederick Family Playground that was built in Manito's Veteran Park. Since childhood, Phil has been a die hard fan of the Chicago Cubs and Chicago Bears. Visitation will be held Friday, February 26, 2021, from 4:00 until 6:00 p.m., at Maas-Hurley Funeral Home in Manito. Funeral services will be held at Manito Community Methodist Church at 11:00 a.m., on Saturday, February 27, 2021. Rev. Steve Oaks will officiate. Burial will follow the services at Meadowlawn Cemetery in Manito. Services will be webcast through the Manito CUMC Facebook page. Memorial contributions may be made to American Cancer Society, Manito Community United Methodist Church or to the Frederick Scholarship, which will be set up through the Manito Community Bank. Online memorial messages may be left for the family at www.hurleyfh.com. Maas-Hurley Funeral Home in Manito is in charge of arrangements.

The family of Phillip H. Frederick created this Life Tributes page to make it easy to share your memories.

Send flowers to the Frederick family.