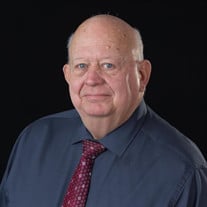 Randall J. Maas, 73, of Manito, passed away at his home at 1:55 p.m., on Thursday, November 5, 2020. He was born October 7, 1947, in Pekin, Illinois, to Russell and Loretta (Kepford) Maas. He married Eleana “Lana” Haessly on November 13, 1970, in Manito. She preceded him in death on June 5, 2018. He is survived by three children: Russell (Lisa) Maas of Heyworth, Stephen Maas of Forest City and Nancy Maas of Pekin; three grandchildren: Rachel, Alex and Ben Maas, of Heyworth; one sister of Springfield, Illinois; as well as two dogs. He was preceded in death by his parents and wife. Randy attended mortuary school in Chicago and later he and his wife purchased Hebenstreit Funeral Home in Gillespie, Illinois in 1971 and operated it for ten years. In 1981, they purchased Limback Funeral Homes in Manito, Mason City and San Jose, which they ran successfully for many years before settling in Manito in 1990. Randy had a love of cars, which started with his father who worked for a Hudson/Nash dealership. In 1969, Randy joined the Hudson, Essex and Terraplane Club, from which he recently received his 50-year membership pin. He, Lana and their kids traveled all over the U.S. attending Hudson meets, enjoying time with other club members and friends, and making wonderful memories that will be forever cherished. Randy was a renowned Hudson engine builder, known throughout the world for his work. He was also an excellent engine machinist, and he was always willing to share his expertise. Randy was a long-time member of the Manito-Forest City Rotary Club and was an active member in supporting local government elections. Family was at the center of Randy’s life and he had a close relationship with his children. He enjoyed watching NHRA drag races in his spare time and got a thrill in watching his son Steve race in both local and national drag events. Randy adored his grandkids and was a beloved papa. He never missed a basketball game and loved being involved in their lives. Visitation will be held on Monday, November 9, 2020 from 5:00 until 8:00 p.m. at Maas-Hurley Funeral Home in Manito. Funeral services will be held at 10:30 a.m., on Tuesday, November 10, 2020, also at the funeral home. Rev. Chuck Jeanblanc will officiate. Burial will follow the services at Meadowlawn Cemetery in Manito. Memorial contributions may be made to Forman Ambulance or T.A.P.S., in Pekin. Online memorial messages may be left for the family at www.hurleyfh.com. Maas-Hurley Funeral Home in Manito is in charge of arrangements. Due to COVID restrictions, masks will be required for all in attendance. Also, the funeral home will be limited to a 25 person capacity throughout the evening.

The family of Randall J. Maas created this Life Tributes page to make it easy to share your memories.

Send flowers to the Maas family.