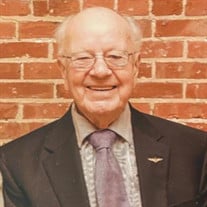 Raymond H. Montgomery, age 99, of Petersburg, IL, died Saturday, March 26, 2022. He was born on March 2, 1923 at the family homestead along the Timbered Road above the Sangamon River flood plain north of Petersburg. Raymond’s parents were William and Ella (Richards) Montgomery. Ray is survived by his wife, Alia; his children, Paul (Marilyn) Montgomery of Petersburg, Nanette Bess of Pittsfield, William Sewell Montgomery; 10 grandchildren; Katie (Craig) Heisner of TX, Christopher Sean (Leslie) Urish of Lincoln, Adam Canady of Springfield, Cory (Kate Blissett) Canady of Riverton, Kristen (Brian) Garrett of Quincy, Alyssa Canady of Petersburg, Jamie Canady of Austin, TX, Brant (Randi) Bess of Boliver, MO, Catherine Ella (Matt Price) Montgomery of Petersburg, Grace Canady also of Petersburg; great grandchildren, Jillian and Theodore Heisner of TX, Ayleigh Urish, Kayden Canady, and Presley Canady; one sister in law, Dorothy Sewell King; and many nieces and nephews. Raymond was the sixth of seven siblings born on the farm: Paul, Margaret (Bergen) Howard, David, MaryElla (Allen) and Kenneth. His parents, and all his siblings preceded him in death. He was also preceded in death by two daughters: Catherine Montgomery Urish in 2001, and Juliann Canady in 2008. Raymond worked alongside his family in the early years at the farm. He attended Brush School and graduated from Harris High School in 1940. He then enrolled at Illinois College in Jacksonville, IL where he had been a member of Sigma Pi. During his second year on campus, Pearl Harbor was bombed, and Ray enlisted in the Navy V-5 Naval Aviation Program in September of 1942. Raymond flew blimps and many other naval aircraft during his service. He was stationed most of his service at Moffit Field, California. Raymond returned to Petersburg at the end of the war and soon after met the love of his life, Alia. He and Alia Anna Sewell were married June 15, 1947 at the Central United Presbyterian Church and lived in Petersburg their entire lives. Ray returned to Illinois College to complete his Liberal Arts Degree in 1948. He took a position delivering mail for the Petersburg Post Office and enjoyed taking mail to all the people along his route. Ray has also worked as a carpenter for Jack Allen. A few years later he became an insurance agent for Country Companies. His brother -in-law, Tom Bergen soon asked him to be a partner with him and Bergen Montgomery Insurance began on the south side of the square in Petersburg. Later he partnered with Mike Rebee and Stan Gerdes and continued as a Northwestern Mutual Life Agent and an independent agent for many years. In 1988 until 1992, Ray was hired by the Secretary of State of Illinois and helped to write the Mandatory Insurance Law for all motorists in the state. Ray was a very active member in the Petersburg community. He helped organize and was a charter member of the Menard County Historical Society, was a member of the Central Presbyterian Church, 1st President of the Petersburg Jaycees, member of the Kiwanis, Masons, American Legion, Veterans of Foreign Wars, New Salem Lincoln League, and Ansar Shrine. Ray was also a member of the Farm Bureau, and a founding member of the Shambolee Golf Club. He had been inducted into the PORTA Hall of Fame, took the Honor Flight, was a recipient of the Studs Terkel Award, began the PORTA Band Boosters with his wife Alia, initiated the building of the Jaycees Park, organized the building of the first Girls’ Softball field, and was Petersburg’s First Citizen. Ray has written three books to promote and preserve the history of the area: A Chautauqua to Remember that he coauthored with Katherine Miller; Living in the Shadows of Greatness; and Song of the Whippoorwill. Ray was known by many as the town historian. A funeral service will be held for Ray on Saturday, April 2, 2022 at the Central Presbyterian Church in Petersburg at 11:00 AM. Visitation will be held two hours prior to the service from 9:00 AM to 11:00 AM. Rev. Gerald Boutelle will officiate. Burial will follow at Rose Hill Cemetery in Petersburg. Memorials may be made to the Cathy Urish Scholarship Fund with PORTA Foundation or to an organization of the donor’s choice. Online condolences may be left for the family at www.hurleyfh.com. Hurley Funeral Home in Petersburg is assisting the family with arrangements.

Raymond H. Montgomery, age 99, of Petersburg, IL, died Saturday, March 26, 2022. He was born on March 2, 1923 at the family homestead along the Timbered Road above the Sangamon River flood plain north of Petersburg. Raymond&#8217;s parents were... View Obituary & Service Information

The family of Raymond H. Montgomery created this Life Tributes page to make it easy to share your memories.

Send flowers to the Montgomery family.