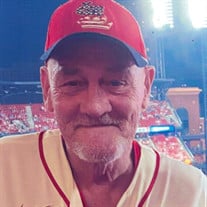 Richard D. “Ray” “Chewy” Owen, 65, of rural Petersburg died at 5:50 P.M. on Friday, November 12, 2021, at HSHS St. John’s Hospital. Ray was born on October 29, 1956, in Quincy, Illinois, the oldest son of Richard Dee Owen and Shirley M. Owen. Ray was the oldest of five children having three younger brothers and one younger sister. Ray was never married and had no children. Ray grew up a precocious child in the Moline, Illinois, area where he attended public schools. Ray’s tested I.Q. was above 150. Ray graduated from Roosevelt University located in Schaumberg, Illinois, with a degree in psychology and a grade point of 3.984 on a 4.0 scale. He received a B in his final class when he wrote his thesis paper on the nature of God and God’s creation of the universe. Ray’s comment was that the professor “was not a God person.” Ray’s work life was varied and meandering. At various times in his life Ray was a chef, a company clerk, a laborer, a gardener, a horticulturist, a topiary, a writer, a painter, and an evangelist. Ray was an athlete and enjoyed athletic competition, following sports, and playing games. He played baseball as a youth and was a catcher/centerfielder on a championship team in Moline. As an adult he played basketball and was a champion handball player. He developed an interest in chess and at one competition defeated a Grand Master. Ray was a St. Louis Cardinals fan, a Minnesota Vikings fan, and enjoyed University of Illinois football and basketball. The great passion of Ray’s life was sharing the Gospel of Jesus Christ with new and old acquaintances, friends, and especially young people. Ray had read the entire Bible through eight times, taking copious notes and recording thoughts and observations. Ray zeroed in on three passages he felt were particularly effective in his witness: 1 Corinthians 15: 1-4 where Paul writes “Moreover, brethren, I declare to you the Gospel which I preached to you, which you received and in which you stand, by which also you are saved, if you hold fast that word which I preached to you---unless you believed in vain. For I delivered to you first of all that which I also received: that Christ died for our sins acoording to the Scriptures, and that He was buried, and that He rose again the third day according to the Scriptures.” Romans 10: 9 where Paul also wrote “that if you confess with your mouth the Lord Jesus and believe in your heart that God raised Him from the dead, you will be saved.” John 3:16 where Jesus says to the Pharisee Nicodemus “For God so loved the world that He gave his only begotten Son, that whoever believes in Him should not perish but have everlasting life.” A visitation for Ray will be held from 3:00 - 4:00 P.M. on Sunday, November 28, 2021, at Rock Creek Presbyterian Church, 16945 Rock Creek Avenue, Tallula, Illinois 62688, with a Celebration of Life to follow from 4:00 – 5:00. Hurley Funeral Home in Petersburg is assisting with arrangements. Please visit hurleyfh.com for Ray’s online obituary. Memorial may be made to Petersburg Rural Fire Department, P.O. Box 343, Petersburg, Illinois 62675.

The family of Richard E. "Ray" "Chewey" Owen created this Life Tributes page to make it easy to share your memories.

Send flowers to the Owen family.