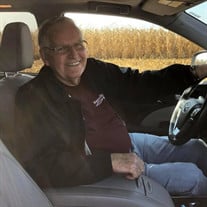 Richard E. Taylor, 88, of Chandlerville, Illinois, died at 2:53 pm on Saturday, January 2, 2021, at Memorial Medical Center in Springfield, Illinois, with his family by his side.  Rich was born September 12, 1932, to Beatrice Edwards Taylor and Arthur Neil Taylor in the family farmhouse in rural Chandlerville.  Rich graduated from Chandlerville High School in 1950.  In 1952 he enlisted in the US Air Force, serving various stateside bases,  Wheelus Air Base in Tripoli, Libya, and Ramstein Air Base in Germany.   Rich married Lieura Sue Lynn on April 23, 1965.  He was a lifelong farmer.  He served as a Trustee on the Chandlerville Township Board for 54 years.  He enjoyed going to his children’s,  grandchildren’s,  and great-grandchildren’s ball games and was an avid basketball fan.  He was preceded in death by his parents, a brother Bill, and a sister Ruth Ellen Marcy.  Rich is survived by his wife of 55 years Lieura Sue Taylor, son Tracy (Melinda) Taylor, daughters Tonya Barrett Reddy and Paige (Byron) Hamblin.  There are seven grandchildren Shana (Michael) Whitehead, Amy Barrett, Chris (Trista) Barrett, Ashley (Dustin) Haines, Joel (Jaclyn) Taylor, Jack (Whitney Dunn) Taylor and Taylor (Chelsea Todd) Hamblin.  There are ten great grandchildren and another one on the way. Also surviving are sister,  Linda Taylor Swann, sister-in-law WandaTaylor, and brother,  Russ (Nancy) Taylor.  Rich was very kind and loving, with a hint of orneriness. He was definitely one of the good guys and an excellent role model for his family. He was very proud of his family, but never bragged on them. Rich had a beautiful, infectious smile.  His family wants to leave him the message that we love him morether!  Rich attended Panther Creek New Beginnings Church in Chandlerville.  Private funeral services will be held at the church.  The family is being served by Lintner Hurley Funeral Home. Memorials can be made to American Legion Auxiliary of Chandlerville or Panther Creek New Beginnings Church, Chandlerville, Illinois.

Richard E. Taylor, 88, of Chandlerville, Illinois, died at 2:53 pm on Saturday, January 2, 2021, at Memorial Medical Center in Springfield, Illinois, with his family by his side.  Rich was born September 12, 1932, to Beatrice Edwards Taylor... View Obituary & Service Information

The family of Richard E. Taylor created this Life Tributes page to make it easy to share your memories.

Send flowers to the Taylor family.