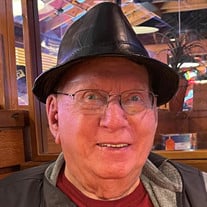 Robert (Bob) Leon Seward, 93, of Havana went to his heavenly home on Saturday, November 6, 2021 at 2:58 a.m. He was born on March 13, 1928 in Ipava, Illinois to Frank and Rose Irene (Wilson) Seward. Bob grew up and went to school in Ipava. He served in the Army for 3 years with an honorable discharge. After returning from the Army, Bob obtained employment at International Harvester where he retired after 30 years of commitment, loyalty, and dedication. After retirement he worked as a good and faithful servant as a part-time custodian at the Havana Church of Christ. In the fall of 1958, Bob married Rose Marie Lane. He and Rose Marie raised 3 daughters-Gay Kong of Honolulu, Hawaii, Glee Osing of Havana, Illinois, and Gwen Neal of Effingham, Illinois. Bob was also grandfather to 6 grandchildren-Broch Nall, Stephanie Neal, Nicholas Neal, Tanner Osing, Chase Neal, and Jacob Neal. He was also great-grandfather to one great-granddaughter, Olivia Osing. Eight years after the passing of Rose Marie, Bob married Eleanor Schapinsky. They were married for 13 years until separated by her death. In Bob’s younger years he enjoyed roller skating, square dancing, taking pictures, and making movies. He was also very talented in building, woodworking, and being an all-around handyman. Bob also enjoyed traveling. He was a long-time standing member of the Havana Church of Christ for over 63 years. Preceding him in death were Elmer Seward, Rose Marie Seward, Rose Noe, Broch Nall, and Eleanor Seward. A memorial service will be held on Thursday, November 11, 2021 at 11:00 a.m. at the Church of Christ in Havana. Pastor Bill Boyce will officiate. Burial will be held at Laurel Hill Cemetery at a later date. Memorial donations may be made in Bob’s name to the Havana Church of Christ. Online condolences can be left for his family at www.hurleyfh.com. Hurley Funeral Home in Havana is in charge of arrangements.

The family of Robert "Bob" L. Seward created this Life Tributes page to make it easy to share your memories.

Send flowers to the Seward family.