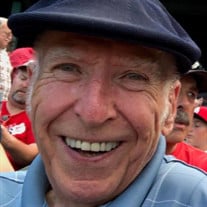 Dr. Robert Schafer, 90, died on Tuesday, May 12 at Springfield Homes in Chatham, IL. Fondly known to family and friends as Doc, Bob or Pop, he had a high energy for life and living. He was born on June 20, 1929 in Wheeling, West Virginia, the son of Walter E. and Matilda (Schmidt) Schafer. Dr. Schafer is survived by his children Mark (Jo) Schafer of N. Platte, NE; Mike Schafer of Indianapolis, IN; Bo (Carol) Schafer of Petersburg, IL; Gina (Chuck) Woodrum of Petersburg, IL; Ann (Kip) Strasma of Deerfield, IL; Tim (Paige) Schafer of Beaverton, OR; his grandchildren Jessica (Craig) Burnside of Lincoln, NE; Logan (Kristy) Schafer of Paris, France; Caryln (Clayton) Craig of Indianapolis, IN; April (Chris) Cox of Indianapolis, IN; Jolori (Evan) Thurman of Markleville, IN; Nick (Erin) Schafer of Springfield, IL; Lauren (Brent) Kulavic of Springfield, IL; Claire Schafer of Petersburg, IL; Lindsay (Mitch) Wissmiller of Spaulding, IL; Christy Woodrum of Athens, IL; Madalynn Woodrum of Sherman, IL; Taylor and Ashley Schafer of Beaverton, OR; and 16 great-grandchildren, and many nieces, nephews and extended family. He was preceded in death by his parents, sister Helen Gantzer Stenger, wife Harriet, and daughter Mary Thurnau. Dr. Schafer completed undergraduate and Medical School at Saint Louis University in St. Louis, MO, where he originally met Harriet (Moore). They were married on June 11, 1955 and were married for 48 years, until Harriet’s passing in 2003. Dr. Schafer served with the Navy in Hastings, Nebraska until he moved with Harriet to Petersburg, IL in 1959; he setup a medical practice with Dr. Barry Free at the Menard Medical Center, where he practiced as a family medical physician until his retirement in 1997. Dr. Schafer also served for 24 years as the Medical Coordinator for downstate Illinois for the Illinois Department of Professional Regulation, now named the Department of Financial and Professional Regulations. Additionally, Dr. Schafer served as the Chairman of the Medical Records Department for Memorial Medical Center in Springfield, IL for almost 25 years. When he retired in 2015 from his Medical Coordinator position, Governor Bruce Rauner recognized Dr. Schafer with an Illinois State Medical Disciplinary Board Resolution, describing him as part of a “breed of physicians who enjoys medicine and keeping on advancements and developments since he became licensed as a physician in 1956, and is kind and generous to all those he has worked with at the Department.” Dr. Schafer was inducted into the Petersburg PORTA Foundation Hall of Fame in March 2018 for his community service and volunteerism as a past president of the PORTA School Board, PTA and member of the Foundation Board. Due to the current shelter in place restrictions, there will be no public services. A celebration of life will be scheduled and communicated at a later day. NOTE: In the next few days – in spirit – say a prayer and raise a glass of your favorite beverage to “Doc”, sharing a story or two and smiling at his memory. Please come prepared at the future celebration of life to share your stories. Dr. Schafer wanted to fulfill his father’s expectations to “leave a place a little better than when you first came.” He (and Harriet) did that — their legacy for all who knew and loved them. In lieu of flowers, please consider a memorial to the Boys Town: Office of Gift and Estate Planning 14100 Crawford Street Boys Town, Nebraska 68010 Attn: Jeremy Belsky

Dr. Robert Schafer, 90, died on Tuesday, May 12 at Springfield Homes in Chatham, IL. Fondly known to family and friends as Doc, Bob or Pop, he had a high energy for life and living. He was born on June 20, 1929 in Wheeling, West Virginia, the... View Obituary & Service Information

The family of Dr. Robert J. Schafer created this Life Tributes page to make it easy to share your memories.

Send flowers to the Schafer family.