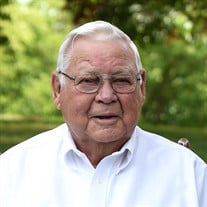 Robert Glen Talbott, 95, passed away at 7:01 a.m., on Friday, April 23, 2021, at his home in Manito, Illinois. Robert was born August 8, 1925, to Glen G and Viola E. (Withers) Talbott, in Mason County, Illinois. Surviving are four daughters: Linda (Ed) Lachey of Arlington Heights, IL; Karen (Kent) Burchfield of St. Charles, IL; Susan (Brian) Frank of Manito, IL; and Kim Talbott of Clarendon Hills, IL; ten grandchildren: Matthew Lachey of Chicago, IL; Kathryn Lachey of Chicago, IL; Elizabeth Burchfield of Calgary, Alberta, Canada; Adam Burchfield of Seattle, WA; Sarah (Derrick) Rollo of Lafayette, IN; Will (Jennie) Frank of Manito, IL; Chris (Alex) Frank of Pekin, IL; Delaney Talbott-Swain, Evan Talbott-Swain and Griffin Talbott-Swain of Clarendon Hills, IL; and eight great-grandchildren: Kate, Clare, Luke and Ruth Rollo of Lafayette, IN; Nicky, Liam and Noah Frank of Manito, IL; and Emmett Frank of Pekin, IL. Also surviving is one sister, Pearl Clementz of Peoria, IL. Preceding him in death was his wife of 73 years, Dorothy R. (Bishop) Talbott, who passed away on August 13, 2020. Also, preceding him in death were his parents, two sisters, Glenola Corinne DeSutter of Manito, Kathleen Griffin of Havana, and two brothers, Gnile Talbott of Manito, and Earl Talbott of Green Valley. Robert joined the U.S. Navy in 1943, shortly after he graduated from Manito High School. During WWII, he served in the Pacific as an Electrician's Mate 3/c and anti-aircraft gunner aboard the USS Thomas Jefferson (APA-30), an attack transport, and participated in the Battle of Okinawa. Robert remained close to his shipmates and attended annual ship reunions across the country. Robert became a boxer while in port waiting to board the USS Thomas Jefferson. As a boxer, he was fed better rations and training and weekly fights helped pass free time while in port. After the war, Bob continued his boxing career as a 136-pound lightweight in the Peoria area and won several Silver Glove tournaments from 1946-49. Bob’s fight record was 86 wins and 1 loss. In 1947, Robert married the love of his life, Dorothy Ruth Bishop of Pekin, IL. He gave a great deal of credit to his wife for his accomplishments and their happy life. Bob and Dot were devoted to one another and took great pride in the family they had raised together. Robert farmed in the Manito area throughout his life. He raised corn, seed corn, soybeans, wheat, and a variety of vegetable crops, including melons, sweet corn, peas, pumpkins, green beans, and beets. Bob won the P-A-G State and National Irrigated Corn Yield competitions in 1972, with a yield of 155.75 bushels per acre. For many years, Bob and his brother Earl Talbott were the co-owners of Talbott’s Christmas Tree Farm. When Bob retired from farming at age 82, he continued to grow a bountiful garden and shared his harvest with family and friends. Robert was a licensed real estate broker who developed the Lakewood Terrace subdivision near Spring Lake and helped develop Northview Estates. Robert was a board member of the Meadow Lawn Cemetery, Manito Area Regional Economic Development, Spring Lake Township and Mackinaw Drainage District #1. He was a member of the United Methodist Church, Hill-Palmer Post of the American Legion, and Illinois and National Christmas Tree Associations. Robert was a steadfast husband, father, and grandfather. He enjoyed watching his children’s and grandchildren’s musical and sporting events and was generous and supportive of all their endeavors. Bob played catch and Trac-Ball with his kids and grandkids. The Talbott family always played a game of Rook when together and, in the last few weeks, Bob was teaching one of his great grandchildren to play the game. His grandkids and great grandkids brought him great joy. Bob loved his wife, his family, his community, and his country. He will be missed by all who knew him. He was, and always will be, loved. Due to COVID-19, a private service will be held, with Pastor Steve Oaks presiding. To leave an online condolence, go to www.hurleyfh.com. Memorials may be made to the Manito Meadow Lawn Cemetery, the Manito Community United Methodist Church, or the American Legion Hill-Palmer Post of Manito. Maas-Hurley Funeral Home Manito assisted the family with arrangements.

The family of Robert Glen Talbott created this Life Tributes page to make it easy to share your memories.

Send flowers to the Talbott family.