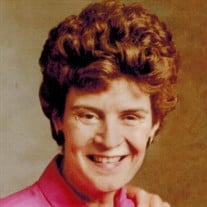 Shirley J. Megredy, 83, of Petersburg, IL passed away on Tuesday, March 9, 2021 at 12:05 PM. She was born in Cass County on November 21, 1937 the daughter of Paul and Fern (Money) Cox. She married Robert Megredy on February 21, 1959 in Sangamon County. He preceded her in death in 2002. Shirley is survived by two daughters, Marcy Handy and Mindy (Mark) Christison both of Petersburg; two sisters, Barbara Masten of Tallula, IL, Linda (Jim) Hughes of Springfield, IL; sister-in-law, Jackie Cox of Dunlap; brother-in-law, Art Brown of Springfield, IL; and five grandchildren, Kelsey Handy of Pleasant Plains, IL, Lauren Christison of Charlotte, NC, Madison Christison of Springfield, MO, Breckyn Christison and Caden Christison, both of Petersburg, IL. She was preceded in death by her parents, three brothers, Richard, Donald, and Jerry Cox; and one sister, Marilyn Brown. Shirley was a graduate of Virginia High School in 1955. She was a member of the Tallula Baptist Church and a member of the Red Hat Society. A funeral service will be held for Shirley on Friday, March 12, 2021 at the Tallula Christian Church at 11:00 AM. Visitation will be held from 9:30 AM to 11:00 AM also at the church. Pastor Robert Dale Sinclair will officiate. Burial will follow at the Garner Chapel Cemetery in Philadelphia, IL where Curt Hughes will officiate. Memorials may be made to the Tallula BLS. Online condolences may be left for the family at www.hurleyfh.com Hurley Funeral Home in Petersburg, IL is assisting the family with services.

The family of Shirley J. Megredy created this Life Tributes page to make it easy to share your memories.

Shirley J. Megredy, 83, of Petersburg, IL passed away on Tuesday,...

Send flowers to the Megredy family.