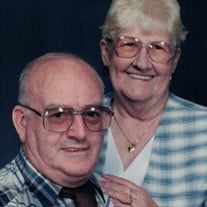 Teddy Lee “Ted” Watkins Sr., 82, of Moline, formerly of Petersburg, passed away on Wednesday, November 4, 2020 at Rock Island Unitypoint in Rock Island, IL. He was born on December 22, 1937 in Ashland, IL the son of John Alvie and Dorothy Almeda (Ringler) Watkins. He married Ninevah Green on April 13, 1963. She preceded him in death on September 14, 2007. Ted is survived by his children, Tim Boyer, Mike Boyer both of Petersburg, J.O. Wolf, and Teddy Lee Watkins Jr. of Moline; and many glorious grandchildren. He was preceded in death by two sons, Daniel Dale Boyer, and Gary Boyer; two daughters, Patricia Garrison, and LeAnn Watkins; and his siblings, Dorothy Moses, Luella Davin, Alvadean Nutt, and Tom Watkins. Ted worked for International Truck and Engine Corp for 30 years before retiring. He had served in the United States Navy and was a Seabee. A private family graveside will be held for Ted on Tuesday, November 10th, 2020 at Farmers Point Cemetery. Memorials may be made to St. Jude. Due to COVID restrictions, masks will be required for all in attendance. Online condolences may be left for the family at www.hurleyfh.com Hurley Funeral Home in Petersburg, IL is assisting the family with arrangements.

The family of Teddy L. "Ted" Watkins Sr. created this Life Tributes page to make it easy to share your memories.

Send flowers to the Watkins family.