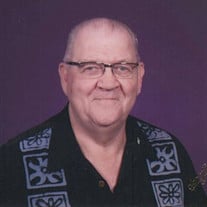 William Lewis Russell, 80, of Chandlerville passed away at Hannibal Regional Hospital in Hannibal, Missouri at 11:00 a.m. on Saturday, August 28, 2021. He was born in Havana, Illinois to John Edwin “Gabe” and Marguerite Helen (Sarff) Russell on July 9, 1941. He married Dixie Lynn Ames in Canton, Illinois on January 3, 1959. They were married for 25 years and later divorced, however, they remained close friends. They had three daughters together. William is survived by his daughters, Pamela (David) Parrish and Paula Russell, both of Chandlerville; granddaughters, Carmen (Brian) Riebeling and Jaylin Parrish; grandsons, Robert (Missy) Oller, Russell (Jinger) Oller, Ryan Oller, Zachary Parrish, and Rhett Birdsell; great-granddaughters, Josalynn Oller, Alexis Guthrie, Ellie Riebeling, and Aria Birdsell; and great-grandsons, Ross Oller, Reese Oller, and Braxxton Birdsell. He was preceded in death by his parents, half-brother, Jack Russell, daughter, Sheana Russell, and companion of 17 years, Earlene Drew. William attended church services at Hopewell Baptist Church and Mt. Olive Baptist Church. He had worked on the railroad, farmed, and as a pusher at local duck hunting clubs. He was a former State of Illinois employee, working on road construction and at Anderson Lake. He was the former owner of a gas station in Chandlerville. He also worked for Caterpillar. Most recently, he had worked as a security guard for Kraft Foods in Jacksonville. Cremation rites have been accorded and graveside services will be held at Snicarte Cemetery on Friday, September 10, 2021 at 10:30 a.m. Rev. Mike Hopps will officiate. Memorial contributions may be made in William’s name to Hopewell Baptist Church, Mt. Olive Baptist Church, or Seven County Kidney Fund. Online memorial messages can be left for his family at www.hurleyfh.com. Lintner-Hurley Funeral Home in Chandlerville is in charge of arrangements.

The family of William L. Russell created this Life Tributes page to make it easy to share your memories.

William Lewis Russell, 80, of Chandlerville passed away at Hannibal...

Send flowers to the Russell family.